How do solar panels create electricity?

The Earth absorbs around 173 thousand terawatts of energy per day in the form of sunlight.

To put that in perspective, that’s 10 thousand times the energy we humans use every day on a global scale.

Transforming this abundant sunlight into electricity would solve all our energy problems, but how do we do it?

Solar panels are the answer.

But to explain how solar panels turn sunlight into electricity, we first have to break things down a little… 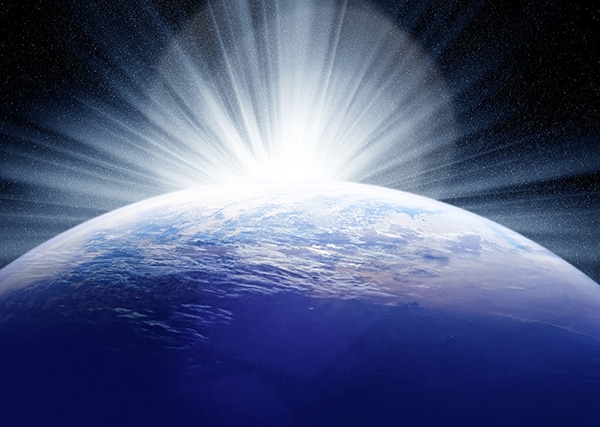 The difference between energy and electricity

If you remember your high-school physics, the first law of thermodynamics states that energy can neither be created nor destroyed; it can only be transferred from one form to another.

This is important, because solar panels don’t actually create energy, they simply turn one form of it (sunlight) into another (electricity).

Light is made up of little packets of energy, called photons. You can think of a beam of sunlight as a stream of these photons, pouring down on the earth.

Photons have no mass, so you can’t feel them, but trillions of them are passing through you every second.

They may not have mass, but what they do have is energy, and we feel this energy as heat and see it as visible light.

Again, harking back to your school days, you may remember that electricity is the flow of electrons.

Every atom has a cloud of electrons surrounding it, and these electrons can join onto other atoms or float off on their own entirely.

This is what happens when electricity is created; the electrons become detached from their own atom, and move along from atom to atom, creating an electrical current.

What solar panels are made of

Solar panels are actually comprised of many smaller units called photovoltaic cells, and lots of these cells linked together make up a solar panel.

Modern solar panels are usually made from silicon, which is a semi-conductor. This will be important later.

Each cell is made up of two silicon plates sandwiched together. The top plate will be mixed with a chemical such as phosphorous, while the bottom one will be seeded with boron.

The reason these two plates are treated separately is because phosphorous and boron will negatively and positively charge the silicon respectively.

As we all know, opposites attract, and so all the negatively charged silicon electrons on the boron side of the fence will want to join up with the positively charged phosphorous side.

As we mentioned before, silicon is a semi-conductor, which means it has traits of both metal and insulating materials.

It’s the insulating part which stops the negative electrons from moving across to join the positive side of the two plates. 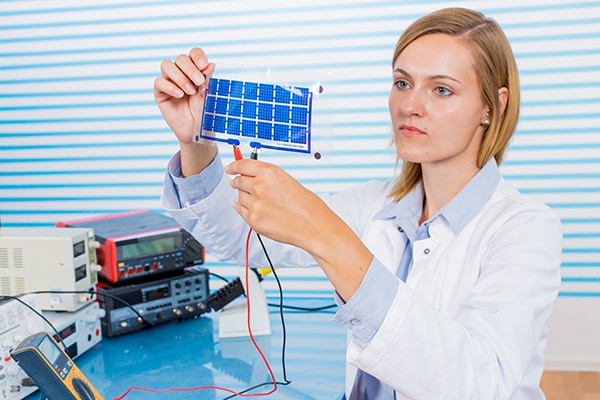 To make the jump across to the positive side of the silicon, electrons need more energy.

This is where sunlight comes in.

Those little packets of energy contained in sunlight, photons, come in from the sun and bump into the negatively charged electrons, transferring their energy and giving them the boost they need to move to the other plate.

So now we have electrons flowing from one place to another, and what does that give us?

The beauty of solar panels is in their simplicity.

There are no moving parts and they don’t require additional energy to operate – just sunlight.

Electrons are the only moving part in a solar panel, and they all go back to where they came from once the circuit is complete. There is nothing to get used up or worn out, meaning solar panels can last for decades.

Although solar panels have been around for years, they are only now starting to become cost-effective, but this means we are reaching the tipping point, and soon the free market will be taking over.

Investors, businesses and energy companies will start to see that the profit is in renewables… and the tide will turn.

Get on board today when it comes to solar power, and start saving sooner rather than later.

Call Bright Earth Electrical if you would like to know more about installing solar systems in your home or business.

Our friendly and experienced team will be happy to answer any questions you may have.

Affected by the recent power cuts? Time to invest in solar powerPrevious Post
Everything you need to know about the Tesla PowerwallNext Post