Electric vehicles will be the norm sooner than you think.

And granted, they’ve been promised for years, but now it’s actually happening, and the speed it’s happening is taking everyone by surprise, even the car companies themselves.

This is the biggest shift in the motor industry since Henry Ford created the production line, and just like that watershed moment, electric cars are about to change the world.

When modern electric vehicles first appeared on the scene, they were mocked and criticised for their cost, range and speed.

Unfortunately, first impressions count, and this initial image has stuck in many people’s minds.

But that was a long time ago, and now EV’s are better in many ways than traditional petrol or diesel cars.

It was only a decade ago that people started buying smartphones. Compare your phone now to the first one you ever bought. Bigger, faster, more powerful – electric vehicles are the same.

Everything from battery size, safety features, and touchscreens have improved in recent years, and EV’s are the main benefactors from it all.

General Motors’ now-infamous EV1 was the first mass-produced electric car and had a range of about 80 km.

20 years later and the new Tesla Model 3 can drive 500 km on a single charge.

The power and range of EVs are growing each year, easily outstripping their traditional counterparts. 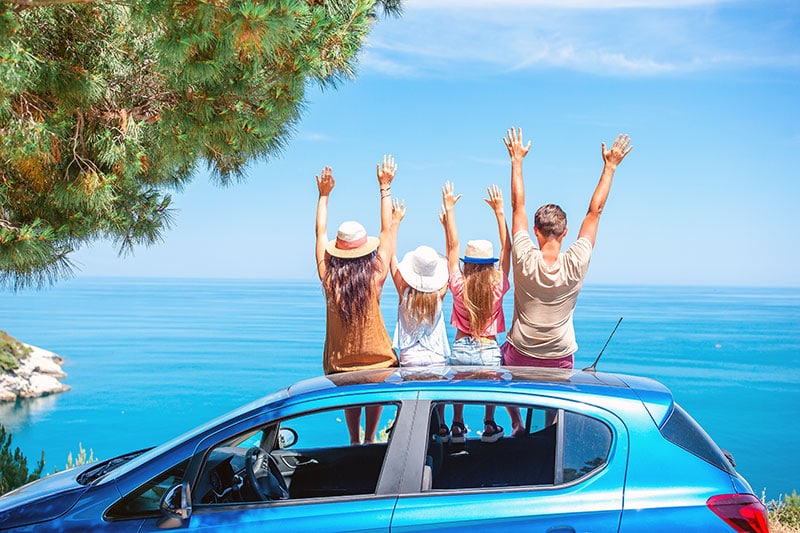 The biggest change in electric vehicles comes in their affordability.

Again, when they first appeared on the scene, the price was prohibitive for the majority of road users.

But now EVs are comparable to regular cars.

Volkswagen plans to launch a family of affordable electric cars under AUD30,000 and once you factor in never paying for petrol again and no engine trouble, then the future is obvious.

A change in the zeitgeist

The perception of electric vehicles has changed, especially in the past 18 months.

Forecasts for the uptake of EVs by the car manufacturers themselves had to be revised after an explosion of interest.

And just like households taking up the internet 20 years ago, the same will happen with electric cars.

How do we know? Because…

This has happened before

Technological revolutions have, of course, happened before, and they tend to happen very quickly.

The internet is a great example.

Go back 20 years and the internet was something a few early adopters had in their home, but the general public wasn’t too fussed. They knew what it was, but saw it as more of a novelty than anything else.

In 2001 there were 513 million people online. Today, twice as many people have a Tiktok account.

Technological growth follows a familiar pattern, known to technologists as an S-curve. 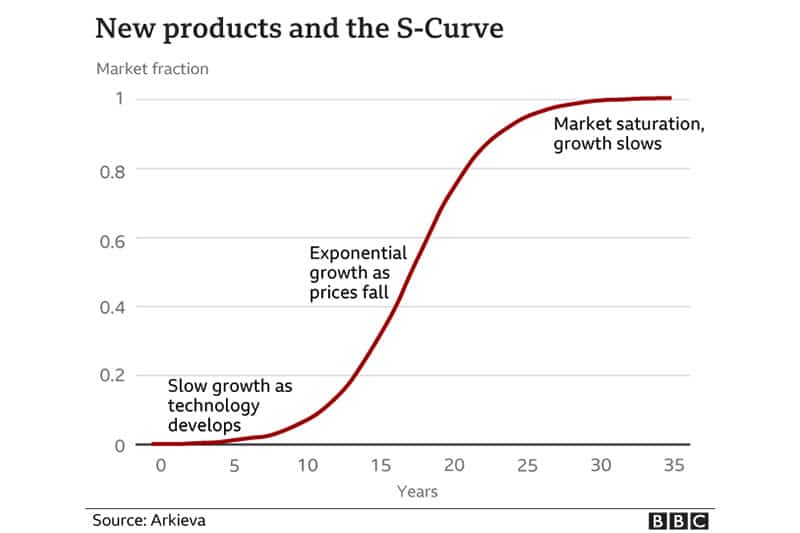 New technology and the S-Curve

What the S-curve shows are that technological innovations start slowly, only of interest to very few people; early adopters and people who can afford new, expensive technology.

But as the market grows, technology improves, and prices fall, more and more people start to buy, resulting in an explosion of interest and buying.

Over a few short years, the curve flattens again as everyone who wants the new tech has it and the market is saturated.

Electric cars are now entering the beginning of the sharp increase of the curve.

If you are interested in buying an electric car or already have one, then take a look at the SolarEdge EV Charging solar Inverter.

This incredible electric car charger is the World’s First 2-in-1 EV Charger and Solar Inverter, meaning there’s no need to install a PV system and EV charger separately.

By using the grid and your solar panels to charge simultaneously, a car’s battery will charge up to four times faster than a standard Level 1 charger.

It’s small, light, and simple to install, add to that the SolarEdge monitoring platform which allows you to control everything from your phone, and you’ve got the latest in electric vehicle solar technology.

Electric vehicles are the future, there’s no doubt about that.

The sooner you join the renewable revolution, the better off your wallet will be. If you wait five years, you’ll look back on all the money you wasted on petrol and kick yourself for not acting sooner.

Contact us today if you would like to know more about our electric car charger, our solar panel systems, or anything else we can help you with.

Our friendly and experienced engineers will be happy to have a chat.